Circle move - is it possible?

Hello!
It’s my first post here so I’d like to say hi to everyone. I really like the feeling and intuitiveness of Photon app and I’m looking forward to switch from Mydmx, but I’ve got some questions and hope you guys could explain a few things I wonder about.
First and the most important for me is if it’s possible to program circle moves, or any other non-linear changes of parameters e. g. exponential dimmer changes?
The second thing is possibility to playback a few scenes one by one. I don’t have a hardware and sequencer yet, but as I saw in a light control section, you can create some steps/states of a show but there’s no possibility to playback them automatically. Is it available in sequencer? I don’t mean the sync to the beat as I saw in the demo video, just - light for 5 seconds, change gobo, light for 2 seconds, change tilt position, wait 3 second - to program and playback

The other question is about the hardware. Is it possible to use somehow the cable connection - ethernet or usb? Many people are often using wifi at the venue and it’s sometimes really hard to use sound mixer which is controlled by wifi too, so it’s good to have a backup wired option.

Thanks and have a nice day!

Hello Andy!
I’m sorry I just came across your unanswered message. I thought it might be a bit late, but hey … I’ll try to help you

At the moment it is not possible to program dynamic moves, they are just fixed positions.
We are working on a big (no… a very huge) version of Photon which will be released soon which will allow us to add this kind of feature later. We recode the Photon’s kernel to allow (later) to do this kind of effects. Moreover, in this next version you will be able to change dimmers with exponential, logarithmic and linear fade in / out (and program your own buttons to do it).

For the second question, again this is not possible in this version. The next one will allow it. I used your example in this image with the future sequencer of the next version. 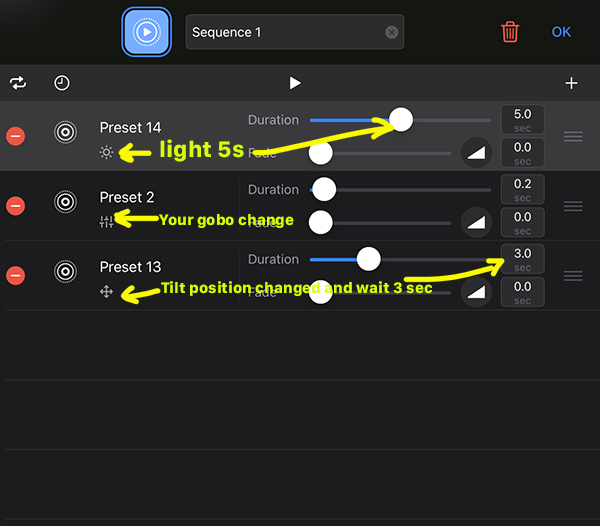 Are you interested in being a beta tester? We could give you advance access to the app so that you can play with it and give us feedback on any issues you encounter.

It is not possible to use Photon with wire. You can use ethernet to connect your device with an ENTTEC ODE for example, but only throw WIFI: https://www.youtube.com/watch?v=wxQn3rdiKVE

Are you still using Photon ? Do you like it ?
Thank you and see you soon !