I’m new to Photon, and I’m wondering if I’m on the right track or not. What I’m trying to do is to map three different Cameo fixtures, which are not found in the current device list. When doing this I’ve got some questions which I’m wondering about, before I’ll show what I’ve done so far.

The control table for the first light, a Cameo Q Spot 40 RGBQ (model no: CLQS40RGBW), I’m working with is: 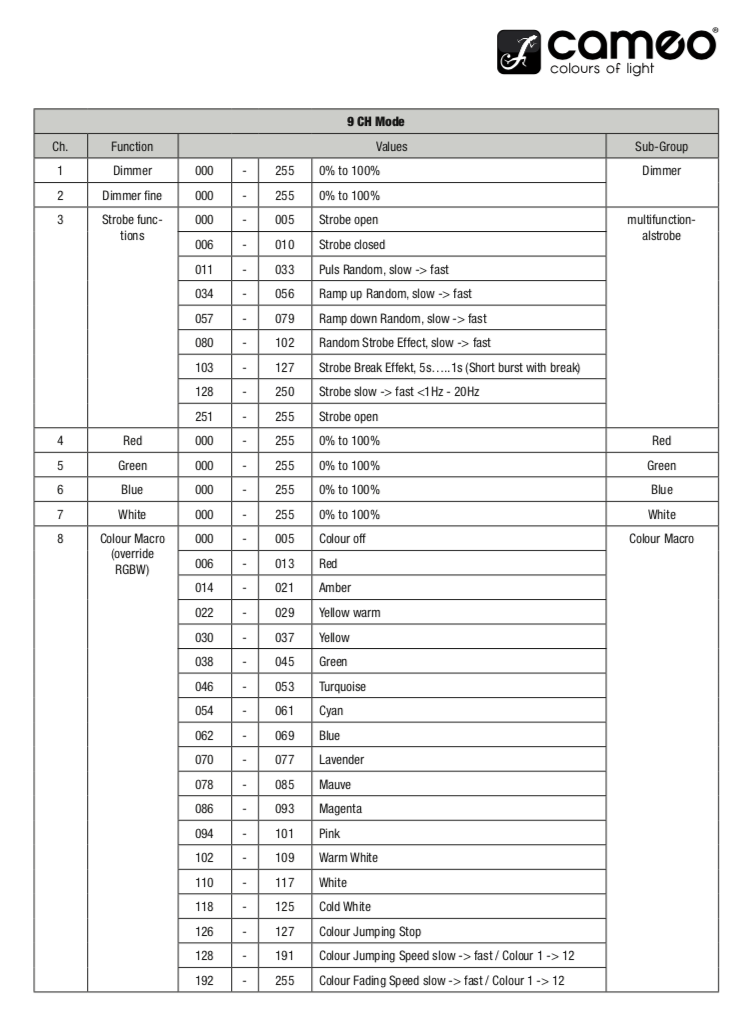 That was a lot of questions, and I’m hoping they’re understandable, and that someone have the time to answer them. I wanted to add some screen shots to illustrate my current attempt, but as a new user I’m only allowed one image.

However, here is a hidden imgur album of those screen shots I took: https://imgur.com/a/VN54wo3

By the way, I’m still working on configuring the Eurolite DMX node and the dedicated network, so I’m not able to tell whether my current configuration works or not, but within a day or two I reckon I’ve got it up and running. Just wanted to get some indications whether I’m doing it correctly, so far.

I’ll try to answer all your questions, I’ill doing my best !

Just keep me in touch when you will configure your Eurolite DMX, you can also send us pics of yours devices runing with Photon that encourages us a lot !
Feel free to ask us if you want and we will try to help you as much as possible.

Thank you all these suggestions, they are really good and they are timely! We have been working hard on a next major version of Photon (v2) for several months and I hope you will enjoy it.

Thanks for the reply, and as you reckon I would also like for the opportunity to copy a custom effect configuration to another device.

I’ve now managed to get it all up and running, will post photos next week, but I’m having a slight issue, which might be just the way Cameo has programmed their lights, not sure. It’s related to how the Colour Macro channel overrides the RGBW channels.

The issue is that if I choose a colour macro using a custom button, or the custom faders, it keeps propagating these changes even after I change the RGBW values. To get the RGBW faders to work again, I need to either hit the “Colour jumping stop” button (values 126-127) or the “Colour off” (value 000-005). When using actual faders this kind of goes naturally as you swipe past the “colour jumping stop” when going towards zero.

Have you guys encountered similar problems like this, and have a way around it? Or do I just have to train myself and the other light technicians to always hit the “Colour off” button when leaving the colour custom effect tab?

The same applies to my custom strobe effect, that if I don’t hit the “strobe off” button, it’ll keep applying the strobe effects.

Hi !
Of course it will be a pleasure to see some pictures of your Cameos installation working with Photon

For the moment I think that you can’t do something better than unselect your custom button before touching the color picker. Customs controls are not linked with Colors controls. in your case it is not really practical but indeed the customs controls are totally uncorrelated.

What is your Photon use case ? Theater, cinema, music stage… ?